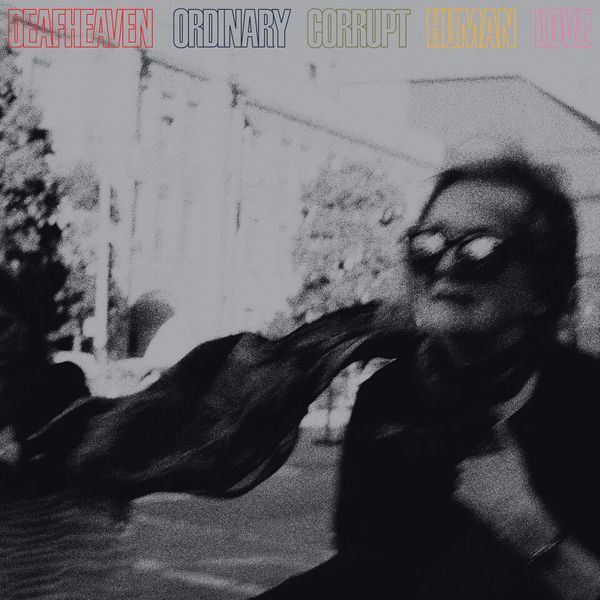 Deafheaven was formed in 2010 by vocalist George Clarke and guitarist Kerry McCoy. They released of their debut studio album Roads To Judah in 2011 and followed it with scrappy, rabid live shows. It maybe wasn’t obvious in those days, but Deafheaven have always had a knack for desolate and literate romanticism.

This became clear with the release of Sunbather in 2013. "Dream House," the majestic opener from the San Francisco group’s Jack Shirley-produced breakthrough album, focused on growing up poor and wanting more. The album, which found the group a larger listenership, was the sound of two friends finding the right collaborator (in drummer Daniel Tracy) and realizing their potential by creating music that somehow embodied the transitory magic of sunspots drifting across a hardwood floor. Featuring gorgeous pink cover art by Touché Amoré ’s Nick Steinhardt, Sunbather was also the first time Deafheaven knew how to control all aspects of their project. Following the recording of the record, they added guitarist Shiv Mehra and bassist Stephen Clark—each subsequent live set felt like a religious experience for the bigger (and bigger) shows that followed.

A year later, in 2014, the band released From the Kettle Onto the Coil, the precursor to their forthcoming third album, and first for ANTI-, 2015’s New Bermuda. Produced again by Jack Shirley and featuring that expanded lineup of Mehra and Clark, New Bermuda was again art directed by Nick Steinhardt, but instead of pink, the band used a dark oil painting by Allison Shulnik for its cover that depicted what looked like a melting face. The image matched the band’s further deconstructing of metal, which offered a bleaker but no-less-triumphant tapestry. New Bermuda was heavier, sturdier, and more grounded in the dirt than Sunbather. McCoy mentioned the death metal of Dissection, Morbid Angel, and Behemoth, along with Cliff Burton-era Metallica as influences, but as a testament to his and Mehra’s brilliant playing, you can still hear remnants of “There Is A Light That Never Goes Out” in the songs. New Bermuda is a kinetic, cathartic collection that mixes beauty and depression, shining lights and suicide. For many, it was the group’s most fully realized offering to date.

Deafheaven’s new fourth album, Ordinary Corrupt Human Love, is another revelation. Working with old friends again, the Shirley-produced and Steinhardt-art directed collection gets its title from Graham Greene’s novel The End of the Affair, referencing a moment when someone is looking for love, in all of its imperfection and simple beauty. This sentiment is carried throughout the hazy, yearning romanticism of the record with song titles and words as sumptuous as the sounds around them. It’s a feeling of a loved one growing distant, medicating yourself with empty sex with strangers, and tears in a place faraway from home.

Taking more literary cues, the lyrics to the expansive “Honeycomb” reference seminal Argentinian writer Julio Cortazar, author of the elaborately structured stream-of-conscious novel Hopscotch while another song, "Canary Yellow," includes the line “I have wondered about the language of flowers.”  Theres an abundance on Ordinary Corrupt Human Love—layered psychedelic vocals, classic rock riffs, jazzy percussion, a song reminiscent of Slowdive—and it all makes sense within the Deafheaven universe. Piano, always an element of the band’s sound, has a more prominent place here. It drives  “You Without End,” which opens with the forlorn spoken word of Nadia Kury, who reads a moment from a short story by Oakland author Tom McElravey depicting the poetry of small, basic moments: you light a joint, look at a mural, burn yourself, and gaze at a surprise flock of geese flying overhead. In addition, Chelsea Wolfe and her regular collaborator Ben Chisolm add vocals and production to the dusky piano piece, “Night People.” Still, it’s all clearly Deafheaven. These songs have forward momentum and upward lift, Clarke’s pained howls and snarls and growls.

Defeat has inspired some of our best art. If you survive something terrible, you surface on the other side, walk toward the light, and come back to life. Everybody deals with hurt, everybody’s been the cause of their own implosions, and everybody has the capacity to overcome and love again. With Ordinary Corrupt Human Love, Deafheaven have found a way to externalize all of this, and in making their most complete record to date, they turn it into a balm, a warm blanket, and a cathartic exorcism.